[From the Record of the United Free Church of Scotland, Edinburgh]

What wins people to Christ? He has a universal appeal; and what the deciding factor is in one country is sure to be of force in another. An analysis in the Moslem World of the motives which led groups of Persians to leave the Moslem faith for Christianity may interest workers in other countries. A list of questions was issued to the converts in various cities, half of them men and half women; and fifty answered. Their replies are well worth studying in detail. Nineteen said they had been attracted to Christianity by reading the Bible or hearing it read; eight gave "Christian love" as the thing which first attracted them; six mentioned "preaching" or "attendance at church services;" five, personal talk with converts; and two, medical mission work. It is significant that ... nearly half the number attributed their actual conversion to the Bible. Next came preaching, and third the "personal touch." In answer to the question as to what Christianity had done for them, the reply generally was, "Everything." As to what wins Moslems, the answers were: First, "Personal evangelism;" second, "Showing forth the love of Christ;" and third, "The conduct and character of Christians"—which bear out the old truth that religion is caught, not taught. 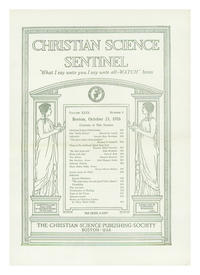