Those who are just beginning the study of Christian Science are sometimes inclined to rebel against the uncompromising statements they find in its textbook, "Science and Health with Key to the Scriptures," and to say that Mrs. Eddy ought to have elaborated her arguments, or to have quoted from other authors to sustain her position. Especially is this the case with those who have had any kind of theological training, and who have been accustomed to study erudite commentaries and to weigh one learned opinion against another, forgetful that libraries are stocked with such works, many of them as dead as the dust which covers them.

Such students, however, if they are honest in their research, presently become aware that Science and Health does not deal with opinions, but with demonstrable facts, which need no elaborate arguments, but which are stated with many contexts and in a manner to meet every demand and stand the brunt of every inquiry. All that the student of Christian Science is asked to do is to prove these statements for himself; and this, after all, is the truly scientific method. The objection that no other authors are quoted is met by Mrs. Eddy herself when on page 126 of Science and Health she says, "I have found nothing in ancient or in modern systems on which to found my own, except the teachings and demonstrations of our great Master and the lives of prophets and apostles." 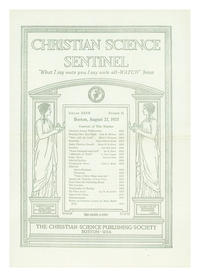