The story of the sojourn of the children of Israel in the land of Egypt and their subsequent deliverance therefrom illustrates the truth expressed by Mrs. Eddy on page 186 of "Science and Health with Key to the Scriptures," where she says: "The only power of evil is to destroy itself. It can never destroy one iota of good." This story also shows that, even in the most trying circumstances, God's grace is sufficient for all His children, so that they can never be tempted or tried beyond their ability to meet and master the temptation through the understanding of God.

The Israelites were known as God's chosen people because their understanding of God was greater than that of other peoples, and despite the fact that subsequent history has revealed how many centuries human thought had to travel before it was ready to receive the more spiritual revelation of God which Christ Jesus brought. Nevertheless, their understanding of God made it possible for them to be called the children of God, and endowed them with power beyond that of other nations; so that, even in Egypt, they became prosperous. So much was this the case that the fear and jealousy inherent in so-called mortal mind were roused against them; for we read that when a king arose who knew not Joseph, he gave commandment that affliction and tyranny be brought to bear upon the Israelites in order to check their growth. We read, further, that the more they were afflicted the more exceedingly they grew and multiplied. This was not surprising, since the heavier the affliction became the more they were forced to turn to God for help, until, in course of time, a deliverer was raised up in Moses. This, surely, is very much like our own experience; for affliction often turns us to God, and then we find that, if we are faithful to divine Principle, the supposed attacks of evil only have the effect of making us rise higher in the demonstration of God's power and of man's freedom from evil. 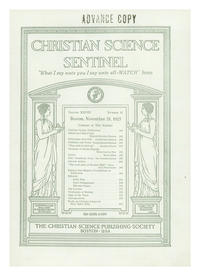