Light in Our Dwelling

One of the great joys which come to one when he takes up the study of Christian Science is in finding that Mrs. Eddy expressed an actual fact when she entitled her book "Science and Health with Key to the Scriptures," since, through lack of understanding, the Bible—though looked upon with the respect due to a venerable institution—had, speaking generally, been put away on most shelves with other literature which played no practical part in men's lives. It is not easy to convey to others the wonderful sense of awakening, of discovery, which comes when, through the study of Christian Science, the Bible records begin to yield up their hidden treasures. If one may compare spiritual experiences with material, the surprise with which Cortes and his men first gazed upon the Pacific may express a feeling somewhat akin to it. Especially is this true of the Old Testament writings; for through general misinterpretation these had been more or less relegated to the region of the legendary, and had therefore ceased to be of interest to the majority, who were thereby deprived of the comfort and power contained in the experiences of those people of ancient times who walked close to God.

In the tenth chapter of Exodus there is recorded one of these illuminating incidents. When Egypt was visited by the plagues, as a result of the resistance of its rulers to the demands of Truth or divine Principle, for three days the land was plunged in darkness, so impenetrable that "they saw not one another, neither rose any from his place for three days;" but, adds the narrative, "the children of Israel had light in their dwellings." In trying to arrive at the true, metaphysical significance of this incident, it is essential to remember the origin of Moses' mission as the deliverer of his people. It dated from his recognition of God as the great I am, a recognition so much more spiritual than any preceding it that it lifted the struggle between the Egyptians and the children of Israel above the plane of a mere conflict between two opposing races into the realm of the age-long battle between Spirit and matter, good and evil, immortal Mind and the carnal mind. 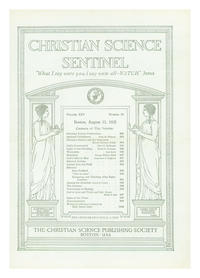