The writer recently met a student of Christian Science who remarked that his Association was to meet shortly in a city some little distance away, but that he did not think he would attend it, as there had been some slight differences between himself and his teacher, and he did not feel that he would get much benefit from such a trip. This conversation clearly revealed the personal viewpoint in regard to Students' Associations, many members of which seem to regard the subject in this light. They often feel that the Association belongs to the teacher exclusively; that the teacher is its leader; that the members must necessarily accord with all the teacher's personal views in order to find benefit from attendance; and that any disagreement with the teacher or with another pupil of the Association furnishes something of an excuse for not attending the meetings, or for feeling that there would not be much benefit in so doing. In other words, it seems to many pupils to be a personal matter: they can attend the meetings of their Associations or not as their personal feelings dictate, and if personal suggestion or disinclination furnishes them with reasons why they need not, or do not care to, there is no greater obligation to be considered and no higher demonstration to be made.

The members of The Mother Church have, however, passed through experiences which have turned them more earnestly than ever to the study of the Church Manual; and it may be that this view has been corrected by faithful study, since it must have been discovered, if not realized before, that the education of teachers in Christian Science, their subsequent instruction of their pupils, and the forming and maintaining of Associations, is not a personal matter at all, but is as much a part of the general government of our movement as are the operations of the Board of Lectureship, the Bible Lessons Committee, and the Committees on Publication, or of any other of the many provisions for growth in genuine Christian Science and its practice. When a Christian Scientist is called upon to become active in any one of these departments, he feels it incumbent upon him to discharge the obligations belonging to that activity. A Christian Science lecturer does not regard the giving of his lecture as a personal consideration; he regards it as a question of Principle to be present at the time appointed, and to do his part in an important demonstration. Only very unusual circumstances would justify him in failing in his agreement. 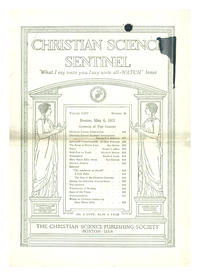