Christian Science has been so long associated with the work of healing physical diseases, and so much discussed in that connection, that many do not at first think of this Science as an exterminator of sin; yet Mrs. Eddy declares that, as in the time of Jesus, its primary mission is not the healing of physical diseases. She writes in "Science and Health with Key to the Scriptures" (p. 150): "Now, as then, signs and wonders are wrought in the metaphysical healing of physical disease; but these signs are only to demonstrate its divine origin,—to attest the reality of the higher mission of the Christ-power to take away the sins of the world."

That this Science does destroy sin has already been proved by thousands of people who have been delivered from the enslaving thoughts and actions which formerly kept them in bondage and in recurring or constant pain. Indeed, the testimonies given in the Wednesday evening meetings of the Christian Science churches and in the Christian Science periodicals often refer to the healing of sin, and also to the overcoming of temptation, which would lead one into sinful practices. As, with gratitude and joy, the beneficiary of this Science of Christianity finds himself healed of sin, his faith in God's power to take away the sins of the world increases. An aroused, and more discerning moral sense then commences to lessen the inclination to accept the temptations of the carnal mind; and, therefore, sins which formerly one weakly indulged in are recognized, and not committed. Christian Science teaches that sin confers no real pleasure. Understanding this, each beneficiary soon learns that pleasure is in and of God, divine Mind, and is found only in thinking and doing rightly, according to the ways of wisdom. Daily, such a one proves, as is said in Proverbs, that "he that handleth a matter wisely shall find good: and whoso trusteth in the Lord, happy is he." 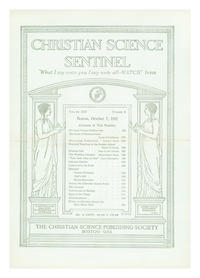