A Storm gathered over the Sea of Galilee. The angry winds and waves joined forces in an attack to sink a ship which carried precious freight,—a little party of students and their teacher. Louder and louder shrieked the winds, higher and higher rose the waves, until they covered the ship, and the frightened men in despair of their lives, wakened Jesus from his peaceful sleep with a rebuke for his apparent indifference to their impending doom. Their teacher's words spoken on the sunny slope of the hillside were but faintly recalled in the struggle with the storm, and they could not comprehend his undisturbed sleep. It was as the great Physician that they had seen Jesus prove the accuracy of his teaching in healing the sick and sinful by his word of authority. Their faith had not yet reached the point of applying the teaching to quiet a tempestuous sea. The frightened cry for help was promptly answered by Jesus, whose command to the angry waves, "Peace, be still," was followed by the tender reproof to the students, "Why are ye so fearful? how is it that ye have no faith?"—and we read that "the wind ceased, and there was a great calm." Three short words spoken by Jesus the Christ, with the authority of spiritual understanding, stilled the troubled waters of Galilee and brought quietness and confidence to fear-filled hearts.

Another hurricane of fear and storm of pain fell upon a sleeping student of Christian Science, who was awakened one morning by a call from her own troubled thought crying out for help. While struggling with loneliness and difficulty in gathering her wandering thoughts sufficiently to declare the truth, only three words came, "Magnify the Lord." She did not at first catch their import and paid but little heed to them, continuing to struggle in the effort to frame a "treatment." Over and over again these three words rang like a bell buoy's warning on a foggy sea: "Magnify the Lord." So insistently did they repeat themselves that she listened while the message unfolded to her like a sweet conversation from friendly lips. "What does it mean," she asked, "and how shall I do it?" "Magnify means to enlarge," came the answer. "Enlarge God? No one can make God larger. Can Omnipotence be enlarged?" "No, God is All-in-all; it is the human sense or small understanding of God that must be enlarged." "But how can I do it?" "In just the same way that anything is enlarged to human vision, —by the use of a magnifying glass. The glass does not change the size of the type under it; the type only seems larger to the eye which looks through the glass." "And where is my magnifying glass? What is it like?" "It is the lens of Spirit through which human consciousness must see God." 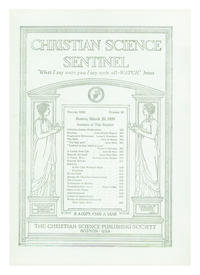