Christian healing was an important part of the ministry of the early Christians. That such healing was practiced considerably beyond the apostolic age has been firmly established through the testimony of many authors and historians. During the centuries immediately following the advent of Jesus of Nazareth, we find the writings of those who accepted and adhered to his teachings corroborated by the records of pagan writers on this point. For instance, Irenaeus, himself a Christian, whose writings appear at about the close of the second century, speaks of "miracles" as being common occurrences. The writings of Tertullian and Minucius Felix, which are contemporaneous, also attest the same facts. Gibbon, an accredited historian, shows that "the supernatural gifts" of these early Christians were not confined to the immediate disciples of Jesus, but even as late as the end of the second century "the resurrection of the dead," he says, "was very far from being esteemed an uncommon event."

Now while it has been generally admitted that this power to heal was lost to the understanding and to the practice of Christianity about 300 A.D., it is apparent to the thinker that there must have been some very good reason or reasons therefor. Christian Science, which is again restoring to Christianity this most important function of healing, explains exactly why it was lost; and it may be simply stated that the letter of Jesus' teachings superseded the spirituality which was requisite for healing, since he had said, "It is the spirit that quickeneth; the flesh profiteth nothing." As a consequence, creed and ritual took the place of the practical application of the truth. Having been beguiled again into a material form of worship, how inevitable it would seem for poor, suffering humanity to be further decoyed into material systems of healing! 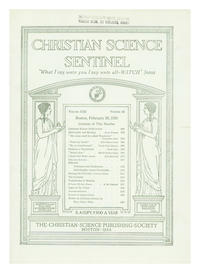