Paul's advice to the Colossians doubtless was of peculiar pertinence to the oriental mind when he said, "Let your speech be alway with grace, seasoned with salt, that ye may know how ye ought to answer every man." Salt was held in the East to be of sacred import. For one to say to another, There is bread and salt between us, signified a union of those nobler interests which bind men together, and a repudiation of this covenant constituted a stigma upon character. Sacrifices were sprinkled with salt, as if to indicate that those offerings represented the sincerity and incorruption of mind which alone were acceptable to God, and to denote a communion and friendship with God. Applying the figure to speech, as Paul did, implies that speech is salted when it is an expression of spiritual thought, when a man recognizes the unity that exists between Principle and its idea, accepts the sacred covenant and acts upon it.

As Spirit is the divine Principle of being, the utterance of Spirit must be spiritual; and the universe is melodious with a universal language, understood by those whose thought is attuned to Truth. Said the psalmist: "Day unto day uttereth speech, and night unto night sheweth knowledge. There is no speech nor language, where their voice is not heard." The birds, the hills, the flowers, and the beasts are known to express the language of Spirit, as the mortal concept of them dissolves and they are found to exist as ideas in divine Mind. 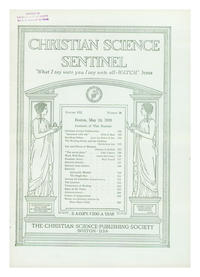