"An instrument of ten strings"

In the book of Deuteronomy we find the blessing pronounced by Moses upon Judah, in which occur the following words: "Let his hands be sufficient for him." The writer was deeply impressed by this thought, as it appeared in a Lesson-Sermon, and pondered it long, but without a satisfactory conclusion as to its hidden meaning. Finally she turned from the passage with the sense of having missed for herself the fullness of Judah's blessing, and the feeling that scanty crumbs had been gathered where an abundant repast had been proffered. In the lesson for the following week there appeared an excerpt from Psalms, indicating the necessity as well as the privilege of true praise, and directing that such praise to God be accomplished by means of "an instrument of ten strings." This term arrested attention and led to earnest endeavor to fathom the spiritual significance of the words.

A particularly tedious and intricate piece of work, requiring especial care and concentration, had just been successfully completed, and much gratification was expressed by all who had shared in the task. One of the office force inquired of the writer, somewhat hesitatingly, if there was not a Bible verse about expressing thankfulness with the harp and the timbrel, and if that was to be her way of expressing joy over the finished work. "No," was the reply, "I shall use 'an instrument of ten strings.'" Instantly there came not only the interpretation of that passage, but as well a clear sense of the meaning of the other verse which had seemed so bafflingly obscure, and the two linked together in beautiful completeness. "An instrument of ten strings"—the utmost of which the hands were capable, and to which they could be sufficient. The full exercise of one's ability then would be required to praise God in the way designated by the psalmist, and anything short of this would forfeit the blessing desired for Judah, that his hands should be sufficient for him. "With what measure ye mete, it shall be measured to you again," declared the Master. "God is not separate from the wisdom He bestows. The talents He gives we must improve," writes Mrs. Eddy on page 6 of "Science and Health with Key to the Scriptures," the Christian Science textbook, and again, on page 89, she says, "We are all capable of more than we do." God prepares the blessing for the hands that are sufficient, the power adequate to every demand. Likewise does He provide the "instrument of ten strings"—scope and opportunity for proof of such sufficiency, for exercise to the full of the abilities divinely bestowed, thus enabling us to furnish evidence of realized blessings by the crown of gratitude. 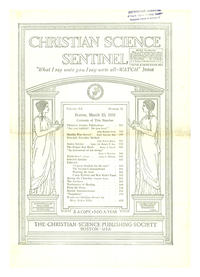