What to Do in War Times

Was there ever a time when war was not going on? Many people may not have been aware of this, but the war germ is so subtle it operates unseen through homes, business enterprises, and governments, setting men and nations at variance with one another. This germ must be detected, dissected, arrested, and exterminated, and the present war brought to a successful termination. The searchlight of Truth turned upon war shows it to be based upon the belief in the fall of man. To reverse this mental error reveals man as unfallen, dwelling in the spiritual creation where no decay can exist. Resistance to Spirit on the part of the flesh makes war. Therefore only absolute obedience to Spirit can place humanity outside the possibility of war. But human will, making minds many, fear, and hate, wars against Spirit, hampers obedience, and resorts to elbowing, sidetracking, and backbiting, sinking finally to total depravity. Even right ideas are stolen and used as camouflage for evil purposes,—to use a war term of to-day.

Nevertheless the war germ destroys itself in the end, for destructive motives and hateful desires finally fall harmless at the feet of the righteous thinker. When the children of Israel asked for freedom from bondage, the power of Spirit was used by Moses, but the resistance of Pharaoh to this righteous demand brought war, ending in the pursuit by the Egyptians until they were lost in the Red Sea. Still the war germ continued to operate among the Israelites themselves, creating doubts and turning them away from God at different times until obedience and trustfulness returned and they entered the land of Canaan. Man unfallen obeys God, and humanity's sure defense in war times comes from living and loving this obedience, thus setting up a spiritual defense which no enemy can penetrate. 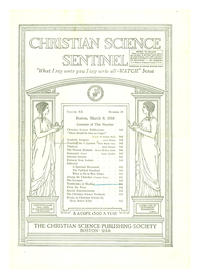