One windy day, while crossing in a small gasoline propelled ferryboat that part of the middle Columbia River where the canyon is deep and the current strong, and where the west wind meeting the opposing action of the water agitates it into whitecapped waves, it came clearly to my thought that we are protected from the elements just in the degree that we reflect the intelligence of divine Love, by means of which we can ride safely over all that appears to threaten us. That and another thought regarding the cause of the agitation of the waters caused me temporarily to forget my surroundings.

In looking at the rolling waves, the words "opposition to spirituality," as Mrs. Eddy uses them on page 329 of Science and Health, so absorbed my thought as to separate me from my immediate environment. I remembered that in traveling on a larger craft from this point down the Columbia along its course to where it broadens out and its current is less strong, even in a brisk wind the waves were not so choppy, which shows that the turbulence is due to resistance. How it illustrates metaphysically the human experiences of discord and inharmony as error opposing Truth! Furthermore, the discernment of the idea helps the realization that all human discord both individual and collective is due to human resistance to truth. 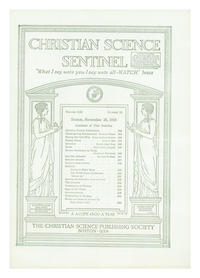