When I was a very young girl at school I was so busy...

When I was a very young girl at school I was so busy studying and preparing myself so as to be able to make a living that I decided there was no time to think about God. Then came the time when I was sick in body and mind, and the doctors said I had studied too hard and there was no hope for me. I suffered from nervous prostration, together with other complications; but because God is omnipotent and it is not His will that one of His little ones should perish, I was led to a Christian Science practitioner, and at the one visit was healed of headaches of long standing. I was so much better in every way that I could have returned to school, but instead I did little for a year but study Science and Health. The revelation of God, man, and the universe which Christian Science unfolded to my thought is the greatest thing that ever could come to me. I was perfectly healed, both physically and mentally.

For these eleven years of divine protection and guidance I earnestly desire to prove my gratitude by showing myself faithful to God in all things. Since Christian Science has taught me that our sufficiency is of God, I am strengthened always when tried. Recently when a dear member of our family enlisted in the Army, we were all beautifully sustained, and instead of any sense of loss or separation we have a growing sense of standing more united than ever before, because Christian Science is giving us a better knowledge of what true unity is.

Send a comment to the editors
NEXT IN THIS ISSUE
Testimony of Healing
About August, 1915, I was advised by one of our best... 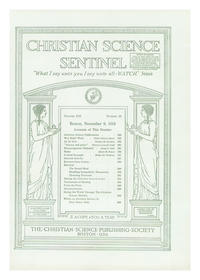