In thinking over the many blessings for which we as Christian Scientists have occasion to be grateful, the understanding which has come in regard to little children is prominent in the writer's thought. The little ones who are instructed in Christian Science cling naturally to all that is good, and it is not at all unusual to find a child simply and naturally disentangling the errors which are still clinging to and hampering the parents' thought. The most beautiful of all is the realization of the wonderful protection bestowed upon these little ones when brought into the light of divine Science.

In a very few years the great cause of Christian Science must be represented in large part by those who today are young children, and its further progress will depend largely upon the purity of thought which is being inculcated, the exactness with which the demands of Principle are being taught, both in the home and in the Sunday school. Mortal mind is prone to argue that it would rather do some other line of work than to teach children; hence it would leave this important duty to another,—some one who could do this work better than the one to whom it is offered. Some such argument as this has come to the writer in a number of different forms, and each time Love has led her back to the knowledge that to teach the children properly was her highest duty and privilege. It is no difficult task to impart the truths of Christian Science to children, when we realize that in every case where error seems to hold its ground stubbornly it is the older thought which seems to be swayed by mortal mind, and not that of the little one. 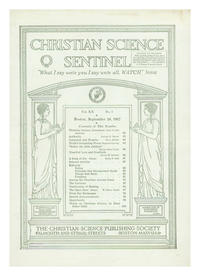