When I first heard of Christian Science I became very...

When I first heard of Christian Science I became very much interested, and desired to know whether it really did heal organic diseases, as was claimed for it; because I had been told by the doctors that although apparently well, I had a blood disease which might break out at any time in some serious and probably incurable form. At the Wednesday evening testimony meetings I met persons who had been healed and asked them to tell me of their healing. I then carefully considered the evidence, and became convinced that Christian Science does heal all manner of disease.

I took up the study of Christian Science, and soon found by my own experience that the application of an understanding of its Principle brings results. Although raised in an orthodox church, I was unable to abstain from profanity or to govern my temper. At one time I had prayed regularly twice a day for several months to overcome these sins, but with no apparent benefit. In Christian Science I learned a better way to pray, so that the profanity was soon overcome and the spells of temper rapidly became less violent and less frequent.

Send a comment to the editors
NEXT IN THIS ISSUE
Testimony of Healing
Christian Science has been to me just as much a preventive... 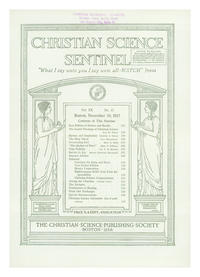