It is with a grateful heart that I tell of the blessings I have...

It is with a grateful heart that I tell of the blessings I have received through Christian Science. I had worn glasses for eight years, but the first day I heard of Christian Science I took a treatment and have not put them on since. That was two years ago. I was also healed of severe attacks of pleurisy in a few absent treatments.

One evening, while returning home from a friend's house, my mother was thrown from the street-car. Her head struck the asphalt and was badly cut. When the company's doctor called the next day, he told us that the injury would affect her mind; but as we were interested in Christian Science we called a practitioner and my mother was able to be around in a few days. It is now six months since this occurred, and she has felt no ill effects from the accident.

Send a comment to the editors
NEXT IN THIS ISSUE
Testimony of Healing
Counting up the many blessings that have come to me... 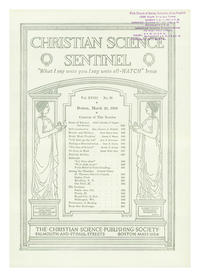