IT is our pleasure and privilege to announce to the field that preliminary steps have just been taken toward the formation of a new and important department of the organized work of Christian Science, to be known as The Christian Science Benevolent Association. We present herewith a statement of the aims and purposes of this new activity, together with a brief history of its development from the time of its inception by Mrs. Eddy to the present.

Those who were in personal touch with our Leader know that she recognized and often spoke of the need, at this period of the demonstration of Christian Science, for properly conducted institutions where those seeking relief through Christian Science might find such care and attention as would assist in their recovery. In about the year 1905 Mrs. Eddy consulted with Mrs. Mary Beecher Longyear of Brookline, Massachusetts, in regard to the founding by Mrs. Longyear of an institution which Mrs. Eddy proposed should be called a "sanatorium," and which should include provisions for such instruction in practical methods of caring for those under treatment as is consistent with the teachings of Christian Science. 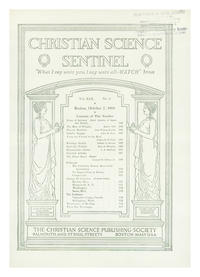