Jesus said: "Whosoever ... shall confess me before men,...

Jesus said: "Whosoever ... shall confess me before men, him will I confess also before my Father which is in heaven. But whosoever shall deny me before men, him will I also deny before my Father which is heaven." These Scriptural words, which were familiar to me from my childhood days, came vividly to my remembrance at a desperate period of my life, when I reached out for help.

In 1912 I became ill, and the attending physician had me taken to the hospital, where it was stated that I had gallstones. The head physician told me that these could only be removed by an operation, and that unless it were performed, I would not live more than seven or eight weeks at the longest. I submitted to it, but went through dreadful suffering, a rupture of the gall-bladder having occurred during the operation, as I was told later, whereby the blood became affected. In about three months' time I had recovered sufficiently to get a dismissal from the hospital, and was then able to work until the middle of January, 1913. From then on the trouble asserted itself again, and became so aggravated that I presented a wretched appearance. I returned to the hospital, but the physician thought it would be dangerous to operate this time, as I was too weak, and when after three months, during which I was under medical treatment, my condition appeared to be unchanged, I was dismissed from the hospital. I now applied for help, as I had done formerly, to the doctor of an association to which I belonged. He showed great kindness and did his best to relieve me, but finally declared that it was beyond his power to help in my case.

Send a comment to the editors
NEXT IN THIS ISSUE
Testimony of Healing
Our little boy was born in October, 1909, and we are more... 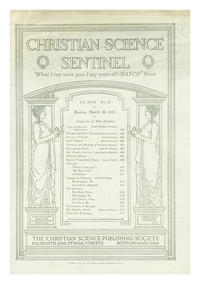