I have often had a desire to make public what Christian Science...

I have often had a desire to make public what Christian Science has done for me, but I could not tell of all my blessings. Some five years ago I had an abnormal growth. At that time I was living in Omaha with my daughter, and she wanted me to try Christian Science. I began to take treatment, but did not get any better while there. Later on we went to Los Angeles, Cal., where I resumed treatment, and in January, 1910, I was healed. In the spring of the same year I went back to my old home in Iowa, where there were no Scientists. In the following autumn I returned to California, this time to Palo Alto, feeling that I needed help for something else that was troubling me.

That winter I was taken ill with very serious bowel disorder, and again I turned to Christian Science and was healed. I have enjoyed the best of health ever since. I am now seventy-six years old, and people often remark upon my good health and vigor. I study the Lesson-Sermon faithfully, have the Sentinel, and sometimes the Journal.

Send a comment to the editors
NEXT IN THIS ISSUE
Testimony of Healing
It is seventeen years since I heard of Christian Science,... 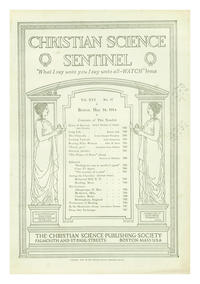