It is with great pleasure that I write this testimony of my...

It is with great pleasure that I write this testimony of my healing through Christian Science. One day, about five years ago, my right knee began to be very painful, but for a time I went about as usual. After coming in from a walk the pain was very bad, and I found that an abscess had formed in the middle of the knee-joint. The knee continued to be more and more inflamed, and was dreadfully swollen. I suffered intensely, and although I tried to treat myself, I could not get my thought away from the pain.

My husband and sisters proposed all sorts of things for me to do, and considered it almost criminal that I did nothing (as they thought); but I wrote to a lady who had already helped me in Christian Science, and who lived a few miles from where we were then living, in Wiltshire. I knew she would get the letter about seven o'clock the next morning, and I also knew that I should get relief then. Accordingly I went to bed, and got through the night as best I could, longing for the morning; for I was unable to sleep because of the intense pain and the immovable condition of the swollen leg. My friend could not have had the letter more than half an hour before all pain ceased, and within an hour the abscess burst, although there had been no appearance that it would break. All inflammation gradually went away, and the knee became much smaller within two or three hours. I got up, went about the house as usual, feeling no pain at all, and in the afternoon walked six miles as if nothing had been the matter. I think this a splendid demonstration, and feel most thankful to God for it.

Send a comment to the editors
NEXT IN THIS ISSUE
Testimony of Healing
I have long wished to express my gratitude to God, also... 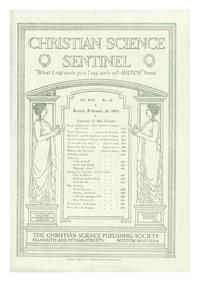