Mrs. Eddy, our critic says, "admits that the Bible God...

Mrs. Eddy, our critic says, "admits that the Bible God was a man-projected God." Mrs. Eddy does nothing of the sort. What she says is this: "The Jewish tribal Jehovah was a man-projected God" (Science and Health, p. 140), which is an entirely different thing. The critic might just as truthfully and just as reasonably say that because Mr. Green says that the ancient Britons worshiped Woden, therefore he admits that Woden is the God of English history. When you come to think of it, if you arrogate to yourself the right to reverse an opponent's premises, there is nothing to prevent your reducing his conclusions to an absurdity. Finally, the critic advances the stock argument of the boil. Mrs. Eddy, he says, contends that a boil cannot be painful, because matter without mind is not painful. "But," he continues, "the man with the boil on his neck is surely mindful of it! He can't forget it." Now, this contributor has been assuring us, throughout an entire column, that Christian Science is nonsense. Let us examine his statement by the light of natural science, in the study of which, he gives us to understand, he is proficient.

When Dr. Johnson wished to prove matter to be real, he did so by the naive method of stamping on it. The argument drew a caustic and characteristic criticism from Huxley. The common-sense philosopher, he remarked, proved matter to be real by stamping on it, or some such irrelevant proceeding. That is what the critic's argument is—just irrelevant. Matter is not real; it is just the other way about; it is "only a thing imagined, which we have constructed for ourselves, very imperfectly, to represent the constant element in the changing series of phenomena." This is not a quotation from Mrs. Eddy; it is a quotation from one of the greatest living chemists, and by chemist I do not mean the druggist of the critic's very questionable witticism about Christ Jesus. Professor Ostwald is one of the leading scientific thinkers in Germany, and when he writes that matter is something we have created for ourselves, he means, among other things, that a boil is a phenomenon existing entirely as a result of energy, or, as the Berkeleians, like Dr. Collyers Simon, would say, of mind.

Send a comment to the editors
NEXT IN THIS ISSUE
Article
Permit me to offer a word of appreciation for your... 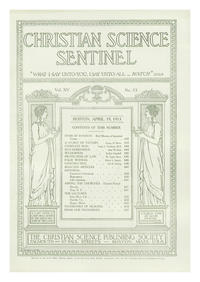