Reading in Genesis the story of the fall of Adam and Eve and their subsequent expulsion from the garden of Eden, one is apt to think how foolish they were, and to say, "I am sure I should have known better than to partake of that fruit;" and yet, are we not one and all partaking of the fruit of the knowledge of good and evil continually? Man's true consciousness may be likened to a perfect garden, and it is our duty as obedient children to see that no weeds spring up and that no disharmony lurks in unexpected places.

The serpent mentioned in the allegory which begins in the second chapter of Genesis, is defined by Mrs. Eddy as "a lie; the opposite of Truth, named error; the belief in more than one God; the first lie of limitation; The first audible claim that God was not omnipotent and that there was another power, named evil, which was as real and eternal as God, good" (Science and Health, p. 594). How often do we listen to this lie, acknowledge its power, yield to its insinuations, eat of the fruit it offers us, and then suffer the direful consequences of our folly, in just the same way that Adam and Eve did! 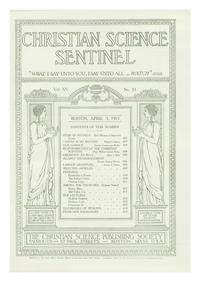