"Tribute to whom tribute is due"

Jesus puts an important lesson before those who are earnestly striving to live the true life when, in his picturesque words to the Pharisees and to his disciples, he declares: "Render therefore unto Casar the things which are Caesar's: and unto God the things that are God's." Paul emphasizes the same truth thus: "Render therefore to all their dues: tribute to whom tribute is due." Mrs. Eddy has but restated these commands when she says: "Man is tributary to God, Spirit, and to nothing else" (Science and Health, p. 481).

When his enemies approached Jesus with the question, "Is it lawful to give tribute unto Caesar, or not?" they were seeking to prove him a traitor to the realm. They dimly apprehended that his kingdom was not of this world, and realized somewhat of his teaching that his followers were citizens of this spiritual realm, and not vassals to a foreign foe. Had he answered, No, it is not lawful to give tribute unto Caesar, he might have been cast into prison, as an enemy of the state. Instead of an unwise reply, he discreetly called for a coin, and pointing to the superscription, said in effect that they should pay unto Caesar the tribute which is Caesar's; and unto God the tribute which is God's. It was true that the Master recognized God alone as his King, and himself as subject only to Spirit and spiritual laws. Environed, however, by those who had no comprehension of the truth so vitally clear to him, he wisely advised that, for the time being, and until a higher state of consciousness should reached, due respect should be paid to the constituted authorities, while holding fast to the true ideal. 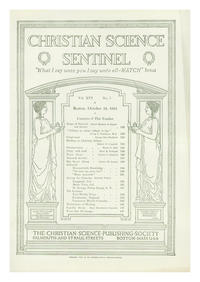