The student of Christian Science has not long been engaged in what becomes to him his life's work before he discovers to his surprise that his concept of God has undergone a remarkable change. It is one that brings a thrill of joy when first experienced, because the sense of separation from God begins to fade and the divine presence is known as a deeply conscious reality. The thought of the infinite distance of God "in heaven" may have been accompanied by perplexity as to why God is silent. "Why does not God speak audibly to us as He did to men in olden times?" How often this has been asked in querulous tones, as if God had hidden Himself and refused to acknowledge His children today. The thought is a burden not only to many who are yet in bonds of materiality, but even to many good Christians who claim to have found spiritual light and the way of life eternal.

The Christian Scientist knows by painful wanderings and waywardness how reluctantly mortal thought abandons its foundations of error, still wanting to ascribe human characteristics to the Almighty and persisting in mentally delineating Him in the likeness of man. It has even been argued at great length that God has really been silent for nineteen centuries, ever since the ascension of Jesus, but that we are on the eve of a revival of those wonderful days when He spoke to men in tones that could be heard, as He did to Abraham and Samuel and David and other of His servants of whom we read in the Old Testament. It is quite true, as Peter declared in the early days of the Christian era, that God did speak "by the mouth of all his prophets," but it is just as true that He has never ceased to speak. Not only does the Christian Science student soon come to know by the best of all proofs that God is always near as Life and Love and Truth, but that He hears and answers prayer. 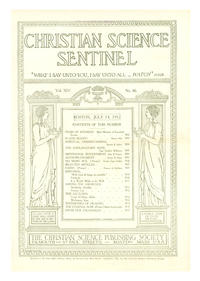