To one who has made a study of Christian Science, and...

To one who has made a study of Christian Science, and who has been able to discern somewhat of its premise and conclusion, nothing could be clearer than the fact that it eschews, yea, abolishes all human will-power or human mind action. Nowhere is there to be found a teaching that so unreservedly turns its students to God, the one divine Mind. The Christian Scientist is ever conscious of the fact, "I can of mine own self do nothing." He realizes that it is the Father that "doeth the works."

Mrs. Eddy has made it clear in "Science and Health with Key to the Scriptures," which is the Christian Science textbook, that divine Truth and Love should dominate human activities. She has pointed out with distinctness and clearness that human will misguides judgment and animates mortal propensities. On page 206 of Science and Health she says: "Will-power is capable of all evil. It can never heal the sick, for it is the prayer of the unrighteous; while the exercise of the sentiments—hope, faith, love—is the prayer of the righteous. This prayer, governed by Science instead of the senses, heals the sick." The struggle to relieve suffering humanity is to be commended at all times, but it should be remembered that there can be but one right way of eliminating from human experience the ills which beset it. For this reason Mrs. Eddy has uncompromisingly given the truth to the world, and the "fruits" thereof are daily proving its verity and worth.

Send a comment to the editors
NEXT IN THIS ISSUE
Article
In the report of the subcommittee of the British Medical... 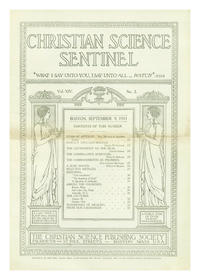