NOT very many years ago the terms "theory" and "practice" were generally regarded as opposed to one another. The theoretical man was depicted as a sort of dreamer or transcendentalist, whose schemes were wholly visionary and impracticable, while the practical man was supposed to be a materialist who earned his bread by the sweat of his brow. Even so great an authority as Webster defined "theory" as a "scheme of things, which terminates in speculation or contemplation, without a view to practice;" and in this belief he was not alone among lexicographers. On the other hand, Sir William Hamilton, the famous mathematician and astronomer, while conceding an individual domain to both theory and practice, takes the correct and widely divergent view. He speaks of "theory" as "a generalization of the principles on which practice proceeds," and establishes an inseparable relationship between the one and the other. It may be said that practice seeks to realize in action what theory proposes as true. Practice needs therefore to be combined with infinite patience, for it is required to prove all things and hold fast to that which is good.

The representative of any theory must of necessity first study its basic law, and its rule must be literally obeyed. The method of the ideal modern business man is a combination of theory and practice. His knowledge of the laws governing the particular business in which he is engaged enables him to solve practical problems in what would seem to the uninitiated to be a miraculous way. The expert electrician, directing what are termed the forces of nature to the use and convenience of mankind, is constantly putting theory into practice, and proving that an idea is not merely a dream but the essence of something which may be realized in action. As an illustration of the power obtained through a proper blending of theory and practice, Sir William Arrol, builder of the colossal cantilever bridge which spans the Firth of Forth in Scotland, during the years of its construction was the indefatigable genius who kept theory and practice in constant relation. While dealing with men of varying grades of intelligence, he succeeded in inspiring them all to do their best work and had confidence in each man's ability to perform his appointed task. Sir William saw the finished bridge in his mind's eye always before him, and no problem that arose was too hard for him to solve. It is said by those who were close to their chief that he was never happier than when called upon to surmount some unprecedented difficulty. He would be lost in thought for hours at a time, but the vision always came and was seldom found to be impracticable. 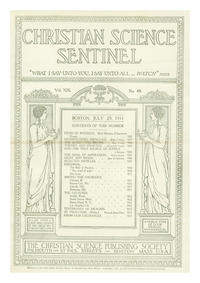