At a meeting held in the board of trade rooms, in the...

At a meeting held in the board of trade rooms, in the interests of the local branch of the National League for Medical Freedom, Dr. Ross, in the course of an earnest address in opposition to the formation of a medical trust, suggested that the Constitution of the United States might well be amended, to provide for medical freedom as it now does for religious and political freedom. The doctor's contention was that the sick had a right to select their own method of treatment, without the interference of any organization or law. It it is desired to try out a bottle of patent medicine or to call in the services of an allopath, homeopath, osteopath, chiropractic, or Christian Scientist, he has a perfect right to so. It is his affair, and none should assume to dictate to him what kind of service he may employ or upon what terms it shall be secured.

The doctor's suggestion is a good one, and while to amend the national Constitution is a slow procedure, if this sudden agitation which has sprung up, and the assaults that are being made upon "medical freedom" are to be continued, something along the line of that suggested by Dr. Ross will be necessary for self-protection. If legislation is to be passed defining the nature of the treatment one must receive when sick, then there should be legislation to combat this new form of medical bigotry and selfishness. The agitation that is now taking place and the effort that is making to induce the passing of legislation by states and nation, depriving men of the right to select their own doctor when sick, is proof of the waning faith in old forms of medical practice and of a growing inclination to break away to try something else. Now it is proposed to force the sick to take the medicine prescribed for them by one school of practitioners, regardless of personal inclination; but the proposition will not be successful. The abridgment of personal freedom, whether in religion, politics, or treatment of the sick, will not be tolerated in a nation boasting of equal rights for all its people, with special privileges for none.

Send a comment to the editors
NEXT IN THIS ISSUE
Article
It is the tendency of men, however sincere, to exalt the... 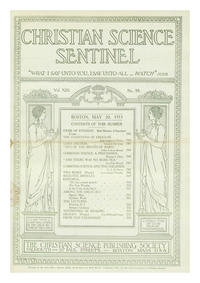