In reflecting upon the remarkable career which has just...

In reflecting upon the remarkable career which has just terminated at Newton, Mass., the ancient query of Pilate, "What is truth?" seems to come readily to mind. Was Mary Baker Eddy a prophet of God sent into the world to inaugurate a new dispensation? Did she usher in light where only darkness reigned before? Will the church which she founded demonstrate in the years to come that it is builded upon that rock against which the gates of hell can ne'er prevail?

These are questions which have been discussed with growing fervor as the Christian Science propaganda has passed from the day of small things into an era of unmistakable influence in the realm of religious thought. We cannot answer them. The present generation cannot answer them. Regardless of what our individual beliefs, doubts, or intellectual or moral conceptions may be, we are sooner or later forced to the conclusion which Tennyson has so happily expressed,—

Send a comment to the editors
NEXT IN THIS ISSUE
Article
Mrs. Mary Baker Eddy, Founder of the Christian Science... 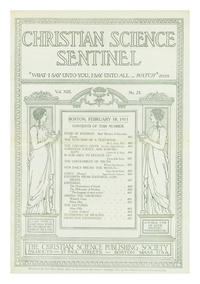