The Christian Science following consists of people of at...

The Christian Science following consists of people of at least average intelligence and ability, people of good standing in each community, who are recognized as sane and sound on all subjects, people who are good citizens and reliable religionists, people of acknowledged Christian character, kindly, charitable, honest and upright in their dealings with their fellow-men. These people one and all agree that Christian Science has brought into their lives a larger measure of health, happiness, and success, a clearer and more adequate understanding of God and their relation to Him, and of their duty to God and their fellow-men, than they had possessed before knowing something of its teachings. It would indeed be a difficult matter to convince any of these people that they have been "humbugged." Now, it stands as a logical sequence that if those who adhere to the practice and follow the teachings of a religion are united in their evidence as to its nature and character, as to its effect upon their individual lives and characters, that all statements to the contrary from those who have not experienced these things and who do not believe in said teachings and are therefore not competent witnesses, are of little effect and prove nothing in the face of facts.

This critic stated that "Christian Science disregards the teaching of hygiene, sanitary laws, etc." With reference to hygienic theories, I will state that these are too varied, too contrary in their nature and teachings to make the criticism of much effect. What might be called "proper" hygienic ideas are susceptible of too many contradictions and too much diversity of opinion and application to be intelligently followed by any one, and if one should attempt to follow all, the result would certainly be disastrous. Now, with regard to "sanitation," cleanliness, etc., the facts of the situation disprove our critic's inferences and implications. Christian Scientists are among the most cleanly people. They are not disregardful or unmindful of proper sanitary precautions, or of the health laws of their community.

Send a comment to the editors
NEXT IN THIS ISSUE
Article
To be a Christian Scientist is not merely a matter of... 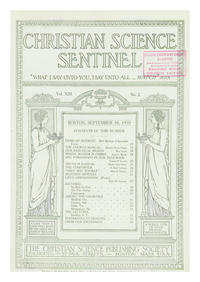