The House, before adjournment, by a vote of 130 to 111, passed the Appalachian forest till so that it could go to the Senate and become the unfinished business to be considered immediately after Congress convenes next December. This bill provides for the expenditure of one million dollars the first year and two million dollars each year thereafter until and including 1915, for the acquirement of forest lands, the preservation of existing forests, and the reforestation of denuded portions of the watersheds of the White and Appalachian mountains in those states which maintain forestry bureaus and systems of fire control.

The postmaster-general has returned to the secretary of the treasury another million dollars of the amount set apart from the public funds to assist in defraying expenses of the postal service. This makes a total of five million dollars thus returned since Jan. I. He is confident that the financial returns covering the operations of the present fiscal year will show a reduction of more than ten million dollars in the total annual deficit, which amounted in 1909 to seventeen million five hundred thousand dollars. 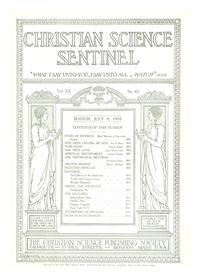