Among the important measures enacted by the present session of Congress are: The railroad rate bill, which gives the Government control through the interstate commerce commission of railroad rates, their classification and regulation, and of telegraph and telephone companies; a committee to investigate the "watering" of railroad stock and the feasibility of supervision of railroad securities; creation of two new states, Arizona and New Mexico; legislation to conserve natural resources; an appropriation of two hundred and fifty thousand dollars to the tariff commission; a twenty-million-dollar bond issue for completion of irrigation projects; publicity of campaign contributions; further restrictions on immigration; protection of seal fisheries; an appropriation of one hundred and fifty thousand dollars to the geological urvey for the study of stream capacities and power sites; two hundred and fifty thousand dollars granted to the department of justice for the prosecution of violations of the Sherman anti-trust law.

The postal bank bill, which has been passed by Congress, designates postoffices as postal savings deposit offices. The opening of such depositaries is left to the discretion of a board of three trustees, consisting of the postmaster-general, the secretary of the treasury, and the attorney-general. In these depositaries any person over ten years of age may deposit funds amounting to one dollar or multiples of that amount. Pass-books will be issued to depositors and interest will be allowed at the rate of two per cent per annum. No person is to be permitted to deposit more than one hundred dollars in any month nor to be allowed to have more than five hundred dollars to his credit at any time. The withdrawal of funds is to be permitted at any time. The postal savings funds, thus accumulated, are to be placed in state and national banks in the communities in which the deposits are made, and the banks are to be required to pay two and one fourth per cent interest. 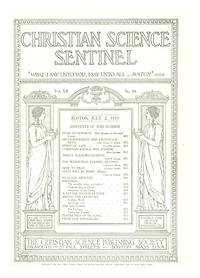