The beautiful new home in Washington, D. C., of the International Bureau of American Republics was formally dedicated last week in the presence of a most distinguished company. The building represents the expenditure of one million dollars, of which sum Mr. Carnegie contributed seven hundred and fifty thousand and the twenty-one American republics the remainder. Its large staff of diplomatic, statistical, and commercial experts conducts an extensive correspondence in English, Spanish, Portuguese, and French publishes a monthly bulletin descriptive of the progress and conditions of the American republics, distributes hundreds of thousands of pamphlets, and declares that it was directly responsible last year for fifty-two million dollars of new business in the exchange of trade among the American republics.

"If I had the power I would force Germany and England to make some explanation of their action in disturbing the world peace by going on with their armaments. I would assert our right to be consulted. I would tell them that they must submit their quarrels to a tribunal." So spoke Mr. Carnegie at the dedication exercises. 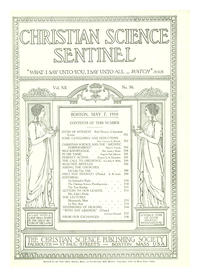