A certain experience brought the writer face to face with the question, Has Christian Science failed to heal? After considerable meditation and prayer, the answer came in an illumination of consciousness which made applicable this passage in Science and Health (p. 513): "To material sense this divine universe is dim and distant, gray in the somber hues of twilight; but anon the veil is lifted, and the scene shifts into light." This pointed to the fact that the work of Christian Science is salvation. Full and complete salvation is the attainment of perfect spiritual consciousness, made up of divine ideas, and this consciousness we know is only reached by the disappearing of the false material beliefs which make up the mortal or supposititious consciousness. What conditions or experiences these material beliefs may require before they yield themselves to the divine ideas, depend upon the nature of the beliefs.

The efficacy of a Christian Science treatment is determined by the measure of the attainment of this spiritual consciousness. It heals because its thoughts are God's thoughts; God is their Principle and power; God invests them with authority. A God-invested thought cannot fail, it must be the annihilation of the supposititious opposing material concept. A material belief of disease may have a hundred different names from the one it calls itself; it may even try to conceal its self-ascribed name and nature. There are grades of human belief, and a better belief yields itself more readily to the divine idea. This better belief indeed is the first evidence of the recognition of its own falsity, and the first step in that betterment process which means its ultimate disappearance. Physical healing is often the first manifestation of an improved belief, but not always; it may even sometimes seem to be the last. This physical healing, for which suffering mortal sense cries out, may be deferred until many other beliefs have been "improved" and brought into subjection. 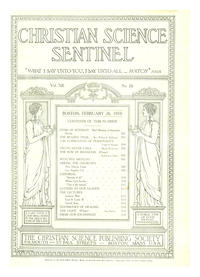