Prudence in statement and action, like the index of a book, discloses that in people which is best, of the most importance. Prudence hears and sees more than it believes; knows more than it tells, and prefers to do more than it promises. It is self-poise, temperance and frugality, looking for the road over which wisdom has passed. It asks God's blessing on every "anticipated performance, and gives Him the glory for every success." It is as "thankful for the daily rod as for the daily bread." As the flower follows the sun, even in cloudy as in fair weather, so prudence turns to Truth, though beset with doubt and urged to speak.

Prudence waits until an idea has passed from the summer of experiment into the winter of test; until precedent, long-sanctioned, has become secure. It is the Sabbath-pause of men, in which they take account of what has been and measure it against what ought to be and is to be. It is the fruit ripening latest under the autumn sun, and sometimes, perhaps, barely escaping the winter's frost, but happy is he who feeds upon its' sweetness at any time of life. If the eyes of prudence are occasionally filled with tears of regret for what it did not do, it rarely sighs over anything it did do. 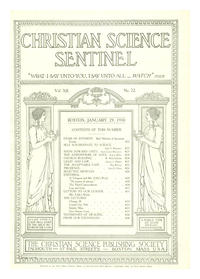