Let me tell you what Christian Science has done for me...

Let me tell you what Christian Science has done for me in bringing out my true ability in athletics, as well as benefiting me generally. Many times I was on the point of giving up—for my early attempts were crude and unpromising; but I stuck, and by dint of persistent, earnest effort I slowly but surely improved. In the underclass track meet, in the fall of my freshman year, I jumped five feet and four inches. During the winter in the armory I got so that I could clear five feet and seven inches on a pinch. In the opening meet of the spring—the dual contest with Pennsylvania—I won first place with five feet and nine inches, which gave me my "letter." This marked my limit for that year. In the winter of my sophomore year, in the dual meet with Michigan at Ann Arbor, "Gary" Serviss and I shared first honors with six feet and one inch, making a new Cornell indoor record, which remains unbroken still. But this was a happy occurrence, one of those supreme moments that occur now and then to all men, in which they rise to the verge of their true ability. I never repeated this performance while in college, although by my senior year I had become a consistent performer at five feet and eleven inches, which was good enough to win second place in the intercollegiate. This was in 1905, and my points proved just enough to give Cornell the margin of victory, and thus her first intercollegiate championship. I always felt as if I could do much better, but extreme nervousness, such as is characteristic in the case of many athletes, always proved my undoing. My strength seemed to ebb out early in the contest, leaving me unfit for the supreme trial and practically worthless as an athlete for several days afterward. Why this was I never could understand—but I have since, and let us see how my enlightening came about and with what results.

It was little over a year after leaving college that Christian Science was brought to my attention. Before this I had known little or nothing about the teaching, and was neither prejudiced against it nor committed to any other system of religion or philosophy. But I was in distress. Lack of the same orderly life as at college, with its balance of exercise and sport, and its steady inspiration, coupled perhaps with a reaction from an exceedingly strenuous round of activities at college and the confusion common to college men upon first being plunged into the vortex of commercial life, presently manifested itself in poor health and low spirits, from which nothing seemed to be able to rouse and rescue me. Insomnia and indigestion, and other things, made existence a misery instead of a joy. Darkness threatened to engulf me.

Send a comment to the editors
NEXT IN THIS ISSUE
Article
It is the teaching of Christian Science that Jesus Christ... 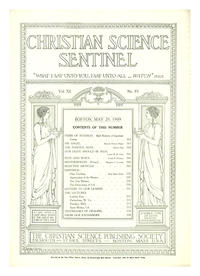