It is not pleasant to think that one professing to be a...

It is not pleasant to think that one professing to be a follower of the Master would wilfully distort and misrepresent the teachings of other professing Christians. For that reason I prefer to consider that the clergyman whose sermon recently appeared in the columns of the Hustler has been a superficial reader of the text-book of Christian Science, and that his views are misapprehensions based on a wrong conception of the real teachings of Christian Science.

This critic told his hearers that "Christian Science denies the Bible teaching regarding sin, the personality of Christ, and the reality of matter." It is true that Christian Science teaches the unreality of sin and sickness in the sense that God is not their creator, nor is He responsible for them. The Bible teaches plainly that God made all that was made, and without Him nothing was made. It also states that "God saw every thing that he had made, and, behold, it was very good." From this view-point there is but one of two positions for any Christian to take: either that sin and sickness and all their attending evils are good, and therefore the creations of God, and cannot be destroyed by human power; or else they are not His creations, hence not real to Him or to the spiritual man who, according to the Bible, was created in the image and likeness of God.

Send a comment to the editors
NEXT IN THIS ISSUE
Article
Christian Science teaches that pain is a mental effect, and... 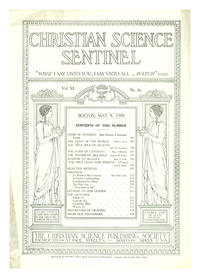