In restitution for the alleged seizure of the sloop Townsend on the high seas in October, 1798, by the French privateer Le Pelletier, Miss Jennie E. McFarland of Searsport, Me., has just been awarded the sum of $483.96, in an amendment to the claim bill recently passed by the United States Senate. Miss McFarland is administratrix of the estate of Ephraim McFarland, who with Joseph Cobb and William Campbell owned the vessel. The estates of the other two owners have also been paid claims aggregating $5,605.18. The Townsend sailed from Boothbay, then in the state of Massachusetts, on Aug. 28, 1798, with a cargo of lumber and fish, bound for the English island of Antigua. In October she was seized by the Le Pelletier as a prize of war. After more than one hundred years had elapsed, the Court of Claims, in a decision filed Feb. 18, 1908, decreed that the condemnation of the sloop was illegal. 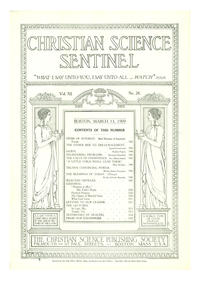