The Y. M. C. A. movement, although embarrassed by the financial stringency of the year, has added more buildings ot its permanent equipment at larger cost than in any previous twelve months. Eighty-four new buildings, costing over $10,000,000. were opened and as many more are under construction or provided for, to cost $9,000,000. The membership of its 1,939 branches has increased to 446,000.

The Supreme Court of Missouri has handed down a decision ousting the Standard Oil Company of Indiana and the Republic Oil Company from the state of Missouri, forbidding them again to do business in Missouri, and dissolving the Waters-Pierce Oil Company of St. Louis unless it become an independent company. In addition each of the companies is fined $50,000. An appeal has been taken. 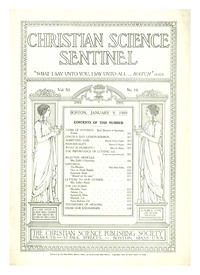