Mrs. Mary Baker G. Eddy, head of the Christian Scientists, has just filed in the registry of deeds in Middlesex County a deed by which she transfers to the Trustees of her estate, Hon. Henry M. Baker of Bow, N. H., Josiah E. Fernald of Concord, N. H., and Archibald McLellan of Boston, the magnificent estate on which she lives at Chestnut Hill. The document was filed as a supplementary deed in trust, and the Trustees will hold the estate under the same terms as they now hold and care for the gilt-edged securities and other property which they took over from Mrs. Eddy under the deed of trust a year ago in March.

Last fall Robert P. Walker, a wealthy real estate operator of Chicago and a member of the Christian Science church of that city, took title to the R. Ashton Lawrence mansion at Beacon and Hammond Streets, Chestnut Hill, and also bought in several parcels of land adjoining the already large grounds, to which they were added. On May 1 two deeds, one dated Oct. 28 and one Dec. 27, 1907, were filed in Middlesex County, showing that Mr. Walker had transferred the Chestnut Hill property to Mrs. Eddy. She has now just retransferred the estate to her three Trustees. 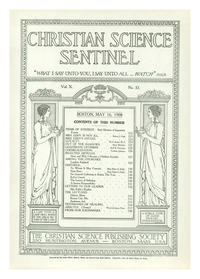