A little more than two years ago I came to Long Beach...

A little more than two years ago I came to Long Beach, seeking health in the sea breezes and warm climate, as I had been living in the central part of Idaho, where the winters are long and cold and the altitude is about six thousand feet above sea-level. My health had been breaking down for a long time, and finally my physician said I was a complete wreck and that he could do no more for me. He advised me to go to southern California and go right to the seashore; which I did, and for the first three months I seemed to be perfectly well. Then little by little the old troubles came back, until I was as bad as ever and gave up all hope of ever getting well. A dear neighbor then told me about Christian Science. The first treatment I had was for trouble with my head and eyes. At that time I was almost blind; I was not able to read at all, or to sew, but after a few treatments I was able to do some fine sewing, and now I can sew or read as much as I please, often reading for hours at a time.

I had been subject to severe and alarming attacks of bowel trouble, and when I had the last one under a physician's care, he said if I ever had another he did not think I could recover, as I had no vitality to build upon. I did have another, and I think it was the worst of all. I called for a Christian Science practitioner, and in the first treatment all pain and fever left me, a feeling of quiet and rest came in its place, and in two days I was around as usual. Always before, when I had such an attack, I would be in bed for six weeks. This was two years ago, and I have had no return of the trouble. My daughter was healed of a very bad case of blood-poisoning in her foot, in a little over a week.

Send a comment to the editors
NEXT IN THIS ISSUE
Testimony of Healing
With the most grateful feeling of love and reverence for... 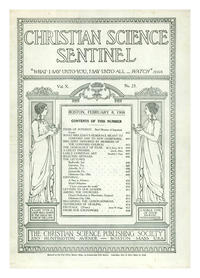