In your issue of Aug. 22, you quote from The Hospital of Aug. 1 a short passage on the kind of person who takes up Christian Science; he is described as of a neurotic and emotional type. That people of this type have found the peace, the strength, the poise and stability for which they have so long and vainly sought, at last and alone in Christian Science, is undoubtedly true, but experience shows that neurotic and hysterical people are not more easily helped by this means than are those who suffer from so-called organic troubles. The fact is that while the public at large are beginning to admit that Christian Science heals, they insist on attributing these cures to some form of suggestion: and starting on this assumption, they declare that only nervous and functional disorders can be got rid of by this means. Christian Science, on the other hand, maintains that all illness, poverty, sin, and misery are the effects of erroneous, confused thinking, resulting from a false estimate of God, man, and the universe; that what is needed is to "know the truth," that is, to have a clear, scientific understanding of the absolute, underlying reality of all things, as opposed to mere appearance and superficial seeming. Mrs. Eddy's book, "Science and Health with Key to the Scriptures," is showing us that the utterances of the great Master are not merely beautiful poetical sayings, appealing to the heart and imagination, but statements of scientific truth as demonstrable to-day as of old.

This teaching is so simple that the little child can grasp it and use it, so profound that it is bringing to the thinker and the truth-seeker the understanding which alone can solve the problems of the world, which alone can unite in one grand brotherhood, gentle and simple, rich and poor, capital and labor, east and west, and can set men free from the misconceptions, misunderstandings, passions, and prejudices which hold the world in thrall. Long ages ago Jesus Christ spoke of God as "the living Father,"—cause, Life itself. St. James saw Him as "the Father of lights, with whom is no variableness, neither shadow of turning," and St. John saw Him as Love. With a God who is unfailing Life, and unchanging law, and a First Cause which is inexorable Love, man can go forth with a stout and patient heart and an unquenchable hope, for he knows that the face of the race is set towards the dawn. 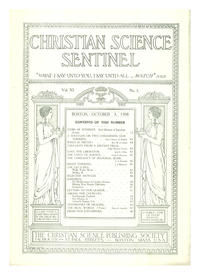