"AND BE YE SEPARATE"

Since truth and error are opposites, they have no affinity, and hence there can be no companionship between them. The general thought of their collusion or combination in consciousness is therefore illegitimate in a moral order, however paradoxical this statement may seem to render all human experience. The spiritually impelled have always felt the incongruity of that seeming association of good and evil which led the great Persian poet to exclaim, "I myself am Heaven and Hell," and asceticism in its various forms has witnessed to a great deal of honest but unprofitable effort to escape from evil by getting away from the world. It has made the mistake of assuming that it must reckon with externality, with persons and powers, physical conditions and forces, when in fact its goal, separation from the world, is to be reached through the elimination of a false sense, of which the world is but an "objective state" (Science and Health, p. 283). It has failed to perceive that the arena of vital and successful struggle is not without, but within; that we are to escape from the world not by running away from things, or by stifling "divinely implanted impulses," but by the transformation of consciousness.

No one will question the fact that the world needs most those who are most separate from it, and hence our removal from men should be that only which enlarges both our capacity and our opportunity to minister to them. The spiritualization of sense, the separation from the old man and his deeds, which is no less our problem than theirs, must be wrought in us if we would aid in effecting it in them. The writer of the Epistle to the Hebrews compasses both the problem and the means of its solution when he says, "God's message is full of life and power, and is keener than the sharpest two-edged sword. It pierces even to the severance of the soul and spirit ... it can discern the secret thoughts and purposes of the heart" (Weymouth's translation). Christian Science has enabled its students to see this as never before, that the only world we have to overcome is the world of pride, selfish impulse, superstition, fear, unbelief, and dependence on materiality, which constitutes mortal sense; that we have simply to part company with a false, unworthy self ("soul"), and that the seeming tie is to be sundered by "God's message," the word of truth, spoken, spoken again, and spoken forevermore in the silent corridors of thought. 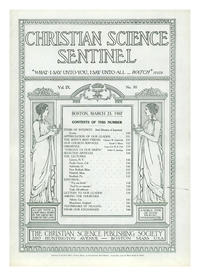