I feel that in justice to Christian Science I should acknowledge...

I feel that in justice to Christian Science I should acknowledge what Truth has done for me. We are told in the Bible to acknowledge God in all our ways. I know that it would be selfish to keep silent longer after receiving so great a blessing, and many helpful lessons from the Sentinel and Journal. I, too, must contribute my "mite" and tell what blessings have been showered upon me through the knowledge of this blessed truth. I praise God for having been healed of the disease mentioned by my husband, and of many other ills that poor mortals contend with. A physician advised that I go to the hospital to have the growth taken out. I said nothing to any one but my husband about treatment in Christian Science. From what I had heard of it I knew that the teachings were nothing less than the Word of God, and the Bible tells us that "he sent his word, and healed them, and delivered them from their destructions." I decided to put my whole trust in God, and I wrote to a practitioner in Kansas City, as I live where there are no Christian Scientists. In less than four months I was healed of this loathsome disease. Although I was at the table every day with the physician who advised me to go to the hospital, he had not noticed that I was healed till one day, looking up, he said to his wife, "Why, aunt's face is well!" I asked him if he would like to know what healed it; he said, "Yes." I told him I had absent treatment in Christian Science, and he smiled and said he might have been mistaken as to the disease. He had been very uneasy about it and thought it unsafe to treat it outside of the hospital.

Christian Science has taught me to know that when we are ready to acknowledge the omnipotence of God, and that we "live, and move, and have our being" in Him, we are then ready to receive the peace that the world cannot give. It is with tenderest affection, gratitude, and respect that I declare my high appreciation of our dear Leader, Mrs. Eddy, for through her has been revealed the verity and rule of the Christianity of Christ, which has always healed the sick as well as the sinful. Our dear heavenly Father has made known through our Leader's spiritual perception this blessed truth, which lifts poor mortals out of Egyptian bondage into the grand heritage of the children of God, having dominion over all.

Send a comment to the editors
NEXT IN THIS ISSUE
Testimony of Healing
For five years we have relied entirely on Christian Science... 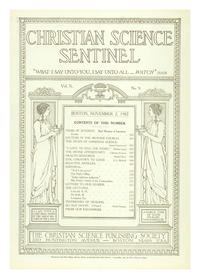