Three years ago I turned to Christian Science, after...

Three years ago I turned to Christian Science, after all material means had failed to relieve me of an affliction from which I had suffered since birth. It seemed to affect the head and eyes, and to cause excruciating pains. For five years previous to coming to Science I had been treated by specialists in three of our largest cities, during which time I had undergone sixteen operations. These left me worse than when I commenced, although the doctors were kind and did their best to help me. I was a physical and mental wreck, unable to do any kind of mental work, unable even to read five minutes at a time. While in this state and on the verge of self-destruction, I turned to Christian Science and was healed. The glasses which I had worn for fourteen years, and which had to be changed as often as twice a week, were left off after the first treatment and have never been used since. I was soon able to read and do my work, that of a bookkeeper. After the first treatment the tobacco and drink habits, which I had indulged for years, also disappeared. I will say that these habits left me without any effort or will-power on my part. They left as naturally as darkness disappears in the presence of light, and there was no longer any desire for their indulgence. During my three years in Science I have not missed one day's work on account of sickness, have not taken any medicine, have gained twenty-six pounds, and am healthier and happier than I ever was in my life. Truly I am experiencing a "new heaven and a new earth," for the former things have passed away. I am deeply grateful to God and to Mrs. Eddy, through whom has been revealed to this age the truth which is raising thousands of helpless men and women to health and usefulness.

Send a comment to the editors
NEXT IN THIS ISSUE
Testimony of Healing
I am deeply grateful to God, and to our beloved Leader... 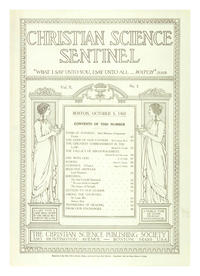