To those who have for years depended upon an appeal to material remedies for relief the thought seems reasonable that the body should be doctored if it is sick. As learners in the school of the greatest of all sciences, the "Science of Soul," we are willing to be logical and grant to the inquirer the same privilege. If indeed the body is sick it surely needs to be doctored, but is it?

Take for example a case which came under the writer's observation. A lady had for a number of years been active in the service of her church, fulfilling every duty as it seemed right to her. At every meal she gave fervent thanks for the food she ate and acknowledged God as the giver of it. At the same time she declared that she knew certain things on the table were detrimental to her health. She continued to thank God for all the food set before her, yet retained her belief that a part of it was not good, until she became a confirmed dyspeptic. In this state of mind she began doctoring the body, when in reality it was her thought which needed correction. Her thought began to be confused when she thanked God for her food and at the same time believed it was not good. What was the result? She lost her faith in God and began to depend upon medicine. Her concept of God was a confused mixture of good and evil, for if her heavenly Father provided all things, and yet certain foods caused her to suffer, then, according to this belief, God must have caused the suffering. 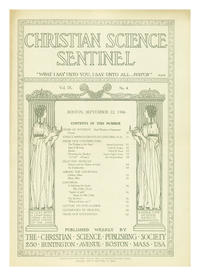