After suffering for the past four years with every form...

After suffering for the past four years with every form of indigestion, and with bronchitis, having been treated by eminent physicians and having taken almost every known drug, and yet having grown worse every day, I gave up all hope of ever being well again. I was a physical wreck when in November, 1905, a Christian Scientist called on us and mentioned the great benefit which Christian Science had been to him. This only amused me, not then being able to appreciate how it was possible. However, I went to Wednesday evening meeting, and all the next day I was thinking of what I had heard. After a long time I decided to try Christian Science, and I called on a practitioner. I told her of at least a dozen troubles I had, and began taking treatment. I went every day for two weeks, after which time I could eat anything I desired.

I had been brought up in an orthodox church, had the example of a devout, good mother, but could not realize that it was the truth which I needed. This fact alone proves to me how little I knew about the Bible, and I thank God for Christian Science, which has not only healed me physically, but morally. My heart is overflowing with gratitude that I have been able to overcome an intense dislike which I had taken to some persons, formerly my friends. Strange as it may seem, they were the ones to whom my heart first went out. I also feel the same love I used to have, and they also have come into Science, which fact has made me especially happy.

Send a comment to the editors
NEXT IN THIS ISSUE
Testimony of Healing
Fifteen years ago Christian Science was first brought... 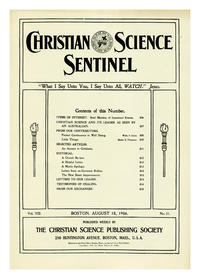