The Fallacy of Pantheism

The principal feature in this old university city, Heidelberg, where I studied two years, 1858 and 1859, is the castle, of which I had an excellent view from the rooms I occupied. Behind its marred walls is a high mountain, which obstructs the prospect in that direction. A long shadow is often thrown by it during part of the day or night over the closely built city below.

High above the only remaining tower that stands out solitary against the sky stretches the bright canopy of heaven, filled at night with innumerable stars, which the astronomer at the university has carefully mapped out with regularity, demonstrating the rotation of all the spheres comprised in the solar system with mathematical exactness. Mathematics being purely metaphysical, astronomy becomes a science of mind, leading into the limitless domain of the infinite, proving through the harmony and precision of the heavenly bodies that all is governed by the supreme Mind.

Send a comment to the editors
NEXT IN THIS ISSUE
Article
In considering the charge of inconsistency made by your... 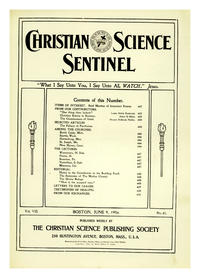