I was healed through Christian Science treatment, about...

I was healed through Christian Science treatment, about five years ago, of what the doctors called ulcerated and inflamed eyes. I first consulted a local specialist, and receiving no help called in the family physician, who said he did not dare prescribe for me as my eye (only one being affected at that time) was in a very bad condition. I went with him to New York City to see a specialist there, who told me he had never seen but six people in his life with eyes like mine, and that none of them ever got well. I, however, treated with him several months, through the family physician. Later I returned to New York and attended a clinic, of which he was the head, three times a week for several months. At this time the doctor advised my having the eye taken out, as he said the sight was practically destroyed; but, as he could not promise to save the other by the operation, I refused. I suffered a great deal, had to stay in a dark room weeks at a time, could not see at all without smoked glasses, and was under doctors' treatment most of the time for six years. The other eye had become ulcerated and I could see but very little when a friend called my attention to Christian Science. After the first treatment in Christian Science I walked down to the practitioner's office without the smoked glasses, and the sun shining on the snow, with no inconvenience or pain. The treatment continued five months, when I was entirely healed.

Send a comment to the editors
NEXT IN THIS ISSUE
Testimony of Healing
For eight years I was a great sufferer from weak lungs,... 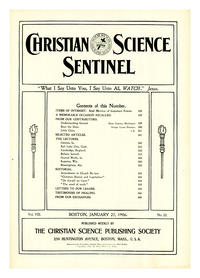