Two years ago last June, on my return from a trip in...

Two years ago last June, on my return from a trip in far northwestern Colorado, I was surprised to find my wife, who had always appeared very healthy, quite sick with dropsy. I was alarmed and called in our family physician, who was at loss to understand the cause. There is a material theory that dropsy is caused by interference with the circulation, and as there are several things that cause it, a search was made at once to find which one of them it was. It was not easy at first to detect the cause, but, after a most rigid examination, he announced that it was organic (valvular) disease of the heart, and. that there was no known cure. I then called in another medical practitioner, one standing among the highest in the esteem of this community and in his profession, and, after a rigid examination, he agreed with the first; and then, no make sure that there could be no mistake, I called in another,—one of the highest known in the profession,—one who made a specialty of heart disease.—with the same result. I then had the first two make examination a number of times, in consultation, always with the same result. They finally told me that nothing whatever could be done for my wife, and recommended that she be kept on her back and made as comfortable as possible so long as she lived, but that there was positively no hope for her, and no known remedy indicated in a case of the kind.

It is needless to say that I was greatly worried, and very likely showed it in my face. One day while at lunch with a friend, he noticed that I was anxious, and said. "Why don't you try Christian Science?" I replied that it could do no good where any vital organ was diseased; that if the trouble was with the stomach, liver, or any other organ influenced by the mind. I would think of trying Christian Science, but certainly Christian Science could do nothing in a case like that of my wife. He replied that he was not a Christian Scientist, and while he did not know that they could cure the disease, he did know that Science could give rest and ease to my wife. "Well," I replied, "if they can do that, I will gladly pay for it."

Send a comment to the editors
NEXT IN THIS ISSUE
Testimony of Healing
I first heard of Christian Science in 1893 through the... 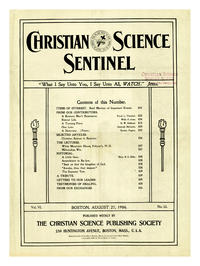