The greater part of the discoveries concerning any of the sciences known to man, has resulted from the effort to acquire a knowledge of the actual truth about existing things. The study of scientific questions reveals facts concerning the universe which are wholly unknown to the mind which has not penetrated beneath the surface of things, and in many instances, the discovered truth contradicts and upsets all pre-conceived evidence and theory. Education is in no sense real education, unless it leads thought out from the tangle of misconceptions concerning everything in the universe, to a knowledge of the truth about everything. Such research, if it be truly educational, means not the destruction of existing things, but the discovery of the truth about all things. If in this growth of knowledge, wrong beliefs are destroyed and false concepts pass away, this in no way touches the thing itself; it but brings the fact to light in its true aspect.

This is as true of the mighty and all-inclusive Science of Christianity, revealed in the Christian Science text-book, as it is of the various forms of science with which men are already more or less familiar. The popular conception of the word science associates it with so-called material laws and facts only; yet if we turn to the dictionaries, we find it to be a term which can be applied with propriety to mental and spiritual conditions. The Standard Dictionary defines science as, "Knowledge gained and verified by exact observation and correct thinking; . . . also, the sum of universal knowledge. . . An exact and systematic statement of knowledge concerning some subject or group of subjects." The same authority also states that "Knowledge of a single fact, not known as related to any other, or of many facts not known . . . as comprehended under any general law, does not reach the meaning of science; science is knowledge reduced to law and embodied in system." "Art always relates to something to be done, science to something to be known." 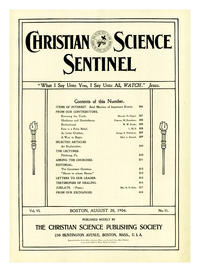